John (White Hat) Willis, a Scotsman who owned a shipping business in London, commissioned Hercules Linton from Inverbervie, to design and build a clipper called The Cutty Sark, for the China tea trade.

The Cutty Sark was built at the shipyard of Scott and Linton in Dumbarton, and was launched on the 22nd November 1869.

The boat was of wood and iron construction, which meant that a larger hold space for cargo was available, and after fitting out, left Scotland on 13th January 1870 to become one of the most famous clippers of the time.
Hercules Linton was born and lived in the Market Square Inverbervie, and today a memorial plaque marks the house where he was born.

He was educated at a private school in Arbuthnott, and completed his education at Arbroath High School, before serving his apprenticeship with the shipbuilding firm of Alexander Hall and Sons in Aberdeen, which was amongst the leading builders of clippers.

The name “Cutty Sark” comes from the poem “Tam o’ Shanter” by Robert Burns, and describes the garment worn by Nannie the witch in Tam’s meeting in Auld Alloway kirkyard;
“…Tam tint his reason a’ thegither,
And roars out “Weel done Cutty-sark!”
And in an instant all was dark…”

The Mearns area is known as the Fatherland of Burns, as the father of Burns was born only a few miles from here in the Parish of Glenbervie.

A memorial to Hercules Linton, in the shape of the figurehead of the Cutty Sark, was unveiled in Inverbervie by Sir Francis Chichester in 1969, and is now in the Burgh Hall.

Today, another memorial statue and plaque to the memory of Hercules Linton, can be seen as you enter Inverbervie from the North.

Hercules Linton also commissioned and supervised, the building of two boats by James (Jeems) Mowatt in his yard at Gourdon.

WOODEN PIECE, THE CUTTY SARK, FROM HER RE-FIT IN EARLY 1950’s 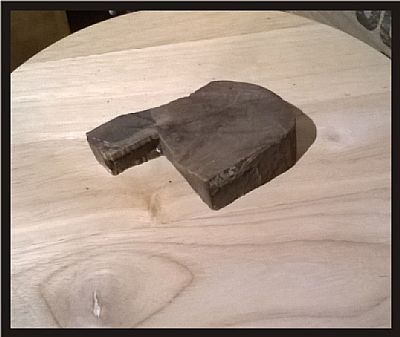 At Greenhithe the Cutty Sark acted as an auxiliary vessel to HMS Worcester for sail training drill, but by 1950 she had become surplus to requirements. From February to October 1951 she was temporarily moved first for a refit and then to take part in the Festival of Britain at Deptford. On 30 January 1952, the 800-ton tanker MV Aqueity collided with Cutty Sark's bow in the Thames. The two ships were locked together after the collision which forced Cutty Sark's jib boom into Worcester's fo'cs'le rails, snapping the boom before scraping along Worcester's starboard side. Cutty Sark's figurehead lost an arm in the process. Cutty Sark was anchored and towed to the Shadwell Basin where repairs were carried out by Green & Silley Weir Ltd. The damaged arm was recovered at Grays Thurrock and the figurehead was repaired.
(Source: Wikipedia)