Who Wants To Discover the History
of the Maggie Law Lifeboat?

If you are interested in maritime heritage, you will be amazed at what's on display at the Maggie Law Maritime Museum! 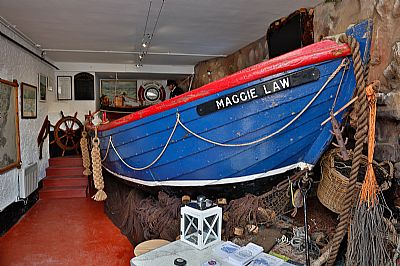 Built in 1890, the Maggie Law was one of the first inshore lifeboats. She was in service for 40 years and saved 36 lives.

The wild and rocky coast around Gourdon, Aberdeenshire, claimed the lives of many fishermen, often wiping out three generations of one family in a single tragedy.  The fishermen of Gourdon took it upon themselves to provide their own solution: to build and maintain an inshore surf boat that would ride the foam, helping to save fishermen’s lives.

Built and launched in 1890 by James (Jeems) Mowatt, the new boat was named after the daughter of local fish curer Tom Law. She was manned by six local fishermen who put their own lives at risk for the safety of their fellow fishermen and families.

How to find us

Only 10 miles south of Stonehaven and 11 miles north of Montrose, make a point of visiting the Maggie Law Maritime Museum when visiting Aberdeenshire or Angus.

Situated in old two-storey coastguard building, the museum sits beside the old harbour and slipway (the Gutty) in the centre of Gourdon. When you come into the village, continue down Brae Road and follow it as it bends round to right at the bottom of the hill towards the main harbour. Keep following the road (William Street) and you'll find us straight ahead. If visiting by car, we'd recommend parking at the harbour as space around the museum is limited.

If you are unable to visit in person, why not have a look at our Armchair Tour?