AN OVERGROWN garden that once 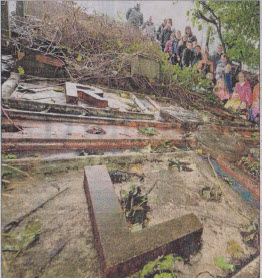 celebrated the RNLI's achievements in Scotland is to be lovingly restored by a squad of volunteers.

Lying undisturbed for almost 40 years,the patch at 7aDavid Street, Inverbervie, once featured an RNLI crown motif with anchor symbols and lettering, and was planted with red, white and blue flowers.

Local nurseryman John Gillanders Sr
built the tribute tor the local lifeboat guild's 25th anniversary in1974, on his own ground overlooking the caravan site.
Mr Gillanders made the letters, anchor and crown from cement, and the bedding
featured red dwarf begonia, white alyssum and blue lobelia.
His work went the way of many gardening projects - but has' now been taken up
by a community project.
See Dundee Courier Article
Back to Top